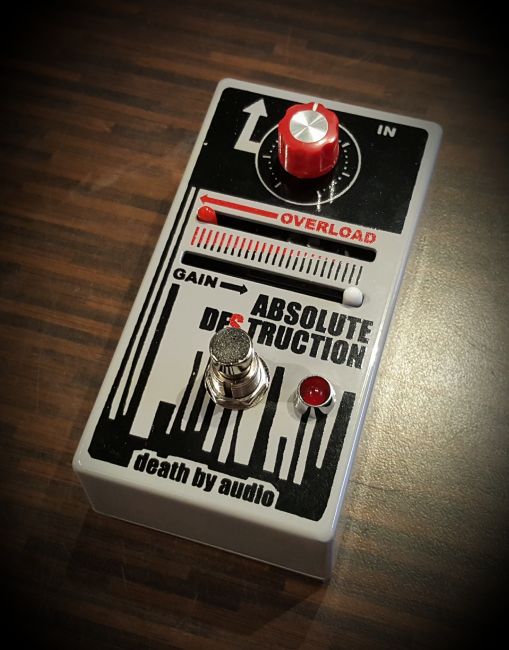 Skip to the beginning of the images gallery
Be the first to review this product
£205.00

Earn 205 points for this item
Applies only to registered customers.
Estimate Shipping
Add to Wish List Add to Compare
Part Number
DBAABS
Introducing the most severe, head 'splodin;, disgusting sounding fuzz DBA have ever made....if you know your DBA products you know that means a lot!!!!!!!!!!!
Details

The Absolute Destruction might be Death By Audio’s most insane pedal yet. Showing little to no respect for what instruments normally sound like, or even what many people want them to sound like, Death By Audio pushed this thing until it sounded totally disgusting.

Want a thick, gnarly fuzz sound? Sure, you can do that, and it’ll sound really, really good. But you can also push the Overload slider into blooming, octave nastiness. Push it further and starve the circuit so that your signal starts to eat itself.

Push it all the way and your sound will completely duck down before violently coming back to life. The Absolute Destruction harnesses a power amplifier IC to generate its insane sound.

Its Gain and Overload sliders interact to create a wide range of “unique” sounds in various positions. You choose how much to absolutely destroy your sound. The farther the Overload control is set to the left, the faster the effect slips into absolute destruction and gets totallydisintegrated. Blow it out even harder and faster by slamming Gain and Overload opposite one another.

Lower one or the other for smoother attack and release. Screaming octaves, thick fuzz, and the sound of your guitar reaching back from the depths of destruction are at your fingertips. Think of it as a psychotic compressor, or the sound your amp might make when literally on fire, or any number of things that your boring friends wouldn’t call music.

• Controls include: Master Volume (the red knob), Overload (red slider), and Gain (white slider). Both sliders are horizontal and recessed close to the enclosure to protect them from being bent or accidentally moved while playing.

• As usual, the Absolute Destruction is built to last forever and true bypass.