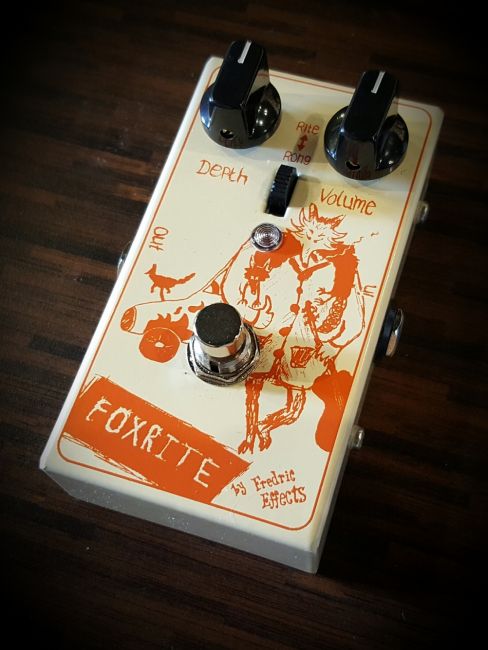 Skip to the beginning of the images gallery
Be the first to review this product
£99.00

This super aggressive, spluttering fuzz shares its DNA with the infamous and highly prized Mosrite Fuzzrite...a snarling silicon fuzz heard on many garage surf records and spaghetti western tracks of the early to mid 1960's!

The Fredric Effects Foxrite is a modernised version of the late 60s Silicon Mosrite Fuzzrite. It is an exact reconstruction of the original circuit, improved with the addition of a boost stage to bring the volume up to modern expectations. The Foxrite is a uniquely abrasive effect - offering sounds from garagey distortion to full-on octavey, velcro-ripping fuzz.

The Foxrite MkII features a central slider switch, labelled 'Rite' and 'Rong'. This adds greatly to the versatility of the effect. The 'Rite' setting is the vintage correct Fuzzrite circuit, whereas the 'Rong' mode is another popular variation on the Fuzzrite. In this mode, the two gain stages of the circuit are kept in series, and the 'Depth' control acts more like a conventional tone control - from doomy bass to raspy, spitting treble.

PCB construction (not perf or vero)

The Foxrite artwork has been custom drawn by Stacey Hine, and is professionally screen printed onto each powder coated enclosure.