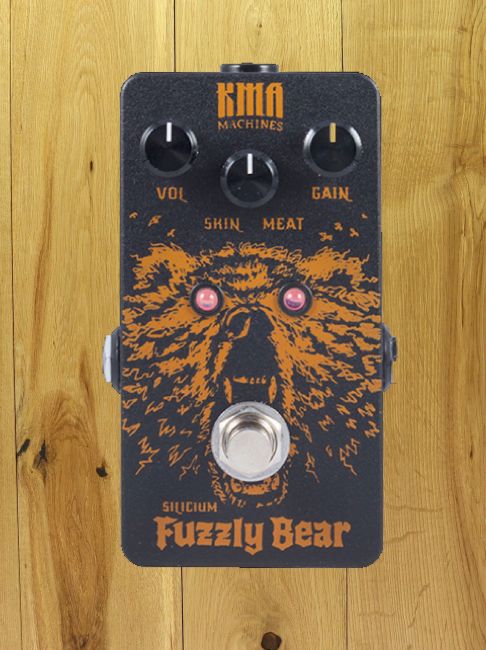 Skip to the beginning of the images gallery
Be the first to review this product
£165.00

Earn 165 points for this item
Applies only to registered customers.
Estimate Shipping
Add to Wish List Add to Compare
Part Number
KMA-FUZZLY
Introducing the Fuzzly Bear from KMA Machines!!! This truly awesome looking pedal is a nod to the infamous Jordan Boss Tone fuzz....a crazy, screechy noise maker famed for its gnarly but often uncontrollable tone! The KMA Fuzzly takes the idea of the original circuit but adds a wealth of low end and, with the onboard SKIN and MEAT controls, allows you to set the voltage bias to dial in anything from smooth, singing sustain to velcro stutter and rip!!!
Details

Holy Spirit of the forest, the Fuzzly Bear fuzz pedal is here, so kick the Switch to unleash the beast!

• SKIN/MEAT knob - provides control over Bias, for a world of fuzz sounds

The sound of this fuzz-pedal is influenced by an old rare and underrated fuzz box from the 1970s, the classic Jordan Boss Tone. The main reason though why this pedal did not conquer the world of effects back in the day, was due to its massive lack of bass. However, the fuzz could be heavenly and ranged from a snake’s hiss, to a kitten’s purr or it could just be downright nasty and trebly. When you found the sweet spot though, it had such a rich voice and all in a day when most fuzz boxes prided themselves on being overwhelmingly grainy or just downright harsh. KMA refined the circuit to get the essence of that old-school sound, but with a modern twist. First of all, they brought back the low end and added a bias control to explore lots of new capabilities of this long forgotten pedal. The essential SKIN/MEAT knob controls the bias of the circuit. You can dial in a sharp skinny fuzzy drive tone or a thick and meaty wall of furry. The GAIN control delivers a whole range of different fuzz shapes. Back it off to get a dirty chunky overdriven tone, turn it up and your tone becomes thicker and thicker. Set the gain fully clockwise and magic will happen: The smooth decay turns into a starved and gated fuzz sound, perfect for classic tunes.