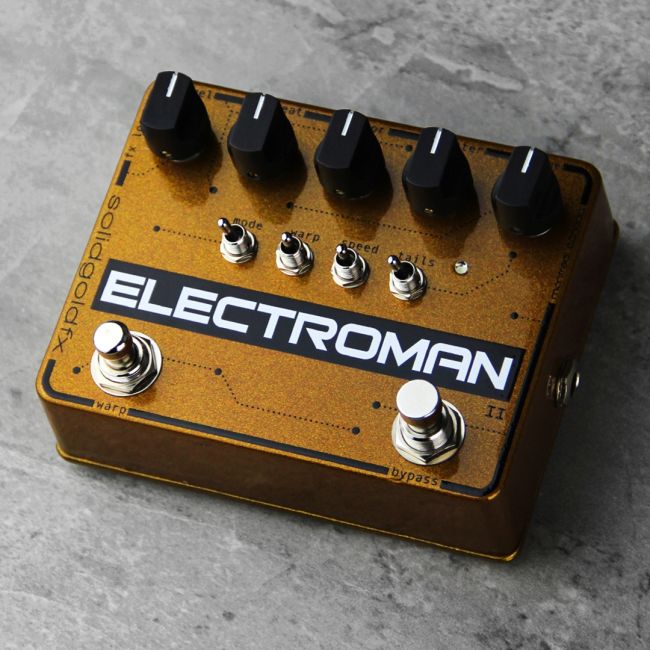 Skip to the beginning of the images gallery
Be the first to review this product
£229.00

The debate over which type of delay is "the best" is one that has plagued guitar shops and internet forums for half a century. On one hand, we have analog purists that prefer the murky degraded repeats of an analog delay, while digital users prefer the exacting repeats of ones and zeroes. Personally, we just like delays that are excellent, and our Electroman MKII is just that: An excellent, feature-rich delay that does everything right.

The core of the Electroman MKII is two cascaded digital delay lines, making bold strides in the arena of PT2399 chips. The PT2399 is a chip developed for DJ rigs and karaoke machines, and when tuned correctly, blurs the line between digital and analog.

The mode toggle takes advantage of that unique dual-line approach, giving you standard delay or one that sends the repeats only to the second chip for a cool half-time sound that will sit front and center on your next ambient or shoegaze record.

The second footswitch of the Electroman MKII retains our warp feature, which sends the repeats ramping up to self-oscillation for ambient textures and spatial soundscapes. But this time, you control the sensitivity with one of three settings on the warp toggle, from gentle nudging into infinity to instant freakouts.

Delay repeats are backed by our extremely musical modulation circuit, which has three selectable speed ranges and a generous flutter control, which increases the depth as you roll it up. This control turns the Electroman MKII into an instant tape echo simulator, where you can dial in just the right amount of digital wear and tear.

While the Electroman MKII is equipped with buffered bypass, our tails switch lets you decide whether or not the Electroman MKII chokes off the repeats when switched off, or leaves them trailing into your amp when bypassed. This feature lets you sculpt your sound just how you like, allowing for precision interplay with your other effects by affecting just one passage.

Level, repeat and time controls come standard, with the time control maxing out at 600 milliseconds of warm delay. The Electroman MKII's color knob will settle the debate between analog and digital snobs by shaving treble content from the repeats as the control is increased.

An extra jack on the left edge takes the Electroman MKII to the next level: The fx loop jack lets you connect a stereo Y-cable to as many auxiliary pedals as you like, with the looped effect applying itself to the repeats. Try an octave pedal for true space exploration, a ring modulator for a lo-fi delay and even a volume pedal for swells of repeats.

Tone is always the goal, so if you want an outstanding delay unit that hacks through the vines of tiered menus and other complicated fluff, let the Electroman MKII be your machete.