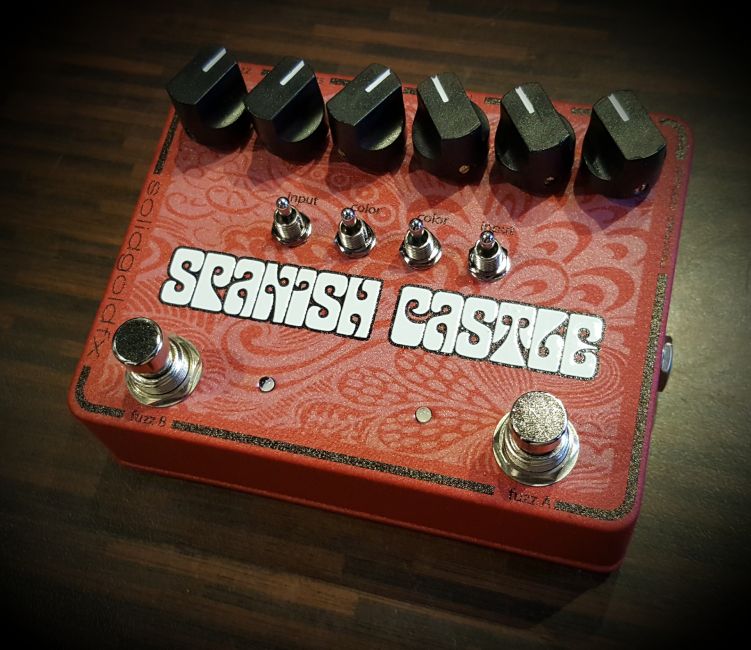 Skip to the beginning of the images gallery
Be the first to review this product
£245.00

Earn 245 points for this item
Applies only to registered customers.
Estimate Shipping
Add to Wish List Add to Compare
Part Number
SOLID-GOLD-FX-SPANISH-CASTLE
If there's one thing Solid Gold FX know about it's fuzz pedals! Building on the succes of their awesome Sasori, If6Was9 and 76Fuzz pedals our friends at Solid Gold bring you the Spanish Castle...a dual stage fuzz designed to meet the fuzzy needs of even the most picky of fuzz connoisseurs!!!
Details

The year 1969: Not only was Led Zeppelin’s eponymous album released, but Woodstock took place in August. 1969 marks a turning point in the gear world also; it was the year that Dallas-Arbiter switched Fuzz Face production from the lower-gain germanium transistor core to readily available higher-gain silicon devices. Our Spanish Castle pays tribute to this year.

Packed to the turrets with fuzz spread across two separate and footswitchable If 6 Was 9 circuits, the Spanish Castle is the perfect device for the fuzz-crazy and fuzz-curious alike. Combining both Fuzz Face eras with a little contemporary magic is what we do around here.

The right side of the Spanish Castle represents the warmer pre-’69 circuit and is equipped with low-gain silicon transistors that emulate the rich character of germanium with more stable and consistent operation. Carbon-composition resistors further round everything out for a sound that is just like they used to roll them off the line. Unlike the Faces of yore, this circuit is equipped with a bias circuit to dial in just the right flavor, and cleans up like a champ. The original tenant of the Spanish Castle would have loved it.

On the left side, our post-’69 If 6 Was 9 circuit lies in wait. This wing of the Spanish Castle offers up higher-gain silicon transistors for a more buzzsaw-like grind, metal film resistors for tighter tolerances and an extended bias range for dialing in ripping gated fuzz textures as well as full-bodied snarl.

Each side offers up two toggle switches—Color is a three-position switch that adjusts the EQ of its respective side, from flat EQ to two settings that shave off treble and mids. The Input toggle is also a three-position switch, changing gain and bass values that make the Spanish Castle adapt better to your wahs and other pedals.

If that’s not enough control for you, each side contains an internal switch that changes between Bold and Comp modes, the former increasing the output and midrange, and the latter offering a softer, more compressed tone.

Please enjoy your stay in the Spanish Castle. You’d better make yourself at home. You’re going to be here a while.