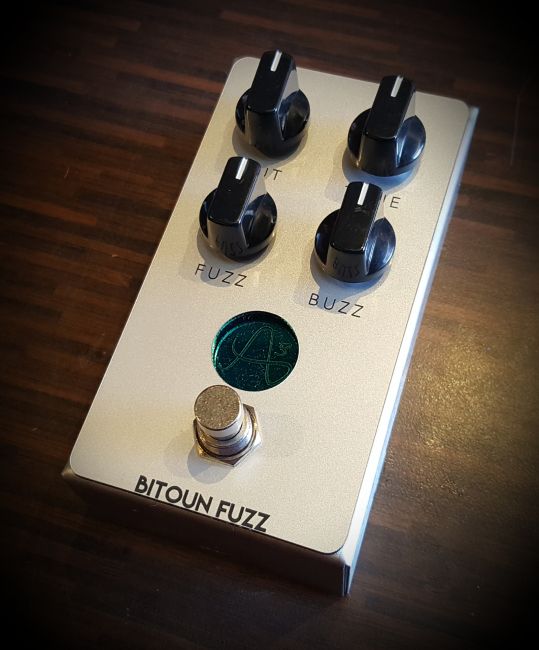 Skip to the beginning of the images gallery
Be the first to review this product
£139.00

Earn 139 points for this item
Applies only to registered customers.
Estimate Shipping
Add to Wish List Add to Compare
Part Number
ANASOUNDS-BITOUN-FUZZ-ALUMINIUM
The Bitoun Fuzz from Anasounds France is a dual stage fuzz machine based around a fuzz-face style circuit feeding a super-fuzz style circuit....the result?...all the huge spitting ring-mod tones of the super fuzz with the extra mid push and clarity of a great fuzz face!!!! This is one of our custom order aluminium front pedals...sleek!!!
Details

Since this magic effect appeared at the dawn of the sixties, the quest for the ultimate fuzz has inspired designers and musicians alike to try and reach that precarious equilibrium between the fluidity of incandescent magma and the rocky spittings of an amp on the verge of bursting into flames.

To put it in layman’s terms, it ain’t easy to find a fuzz that is all at once huge, brutal, musical, and easy to play. or, to put it in even simpler terms: growl, buzz, and la-di-da.

It took years of intense fuzzy research for anasounds and julien bitoun to come to the results found in the Bitoun Fuzz. the original idea was to make the best possible version of the super fuzz. unlike the 1980 italian-american movie of the same name, the super fuzz is an amazing japanese pedal dating back to the sixties with a huge sound, with a hint of ring modulation. the only problem is that it’s an ungrateful sound, very hard to play with an abrupt sustain and a very rocky grain. furthermore, the super fuzz sounds absolutely huge when you’re playing alone but once you get surrounded by a band, its big mid scoop makes it disappear in the mix.

There was a solution to be found, and here it is: the only thing that’s better than a great fuzz is two great fuzzes. The spark came by plugging an Anasounds Feed me into a super fuzz prototype, and the Bitoun Fuzz was born. Many other brands build dual fuzz pedals, and they offer you the possibility to toggle between two different fuzz personalities. the bitoun fuzz is not a dual fuzz, it is a double fuzz! it brings together two circuits that have been designed to work together in order to bring you the ultimate fuzz sound, the one you have been relentlessly searching for… until now.