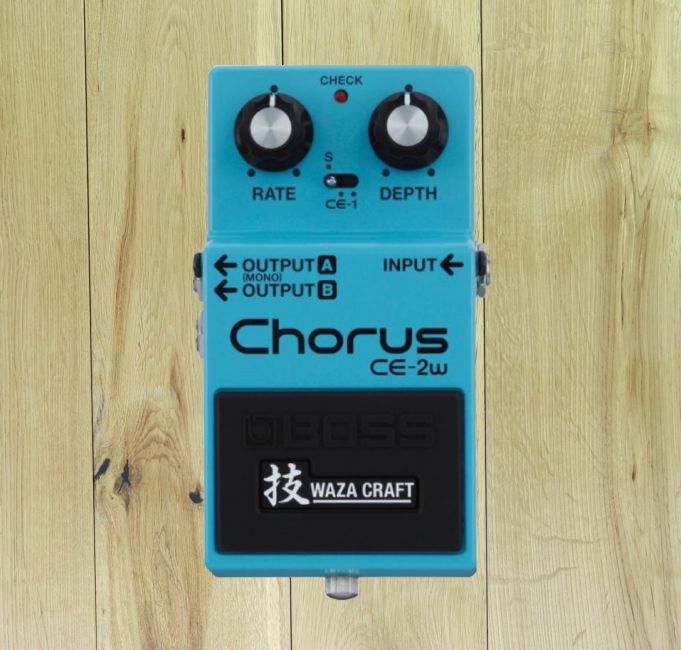 Skip to the beginning of the images gallery
Be the first to review this product
£189.00

Introducing the highly anticipated return of the CE2!!!!! One of the most legendary chorus pedals ever made, the CE2 has become something of a collectors piece with original units now selling for mega bucks due to their association with certain world famous guitarists.

Now available as a WAZA Craft reissue this pedal is back on the market and reasdy to wobble some minds!!

Forty years ago, BOSS created the world’s first chorus pedal, and this signature effect is still synonymous with the brand in the hearts of many musicians. While chorus pedals have remained in the lineup continuously ever since, many players still seek out the CE-1 Chorus Ensemble and CE-2 Chorus, the first two BOSS chorus pedals. Hot items on the used market, these analog BOSS originals are coveted for their rich, musical tones. To celebrate the 40th anniversary of BOSS effects, the Waza Craft CE-2W recreates these classics with complete sonic accuracy, while also adding some enhanced features not available before.

The Waza Craft CE-2W Chorus brings the CE-1 and CE-2 back to life using premium analog components and old-school BBD circuitry. Standard mode delivers the authentic CE-2 sound, which is now available in stereo for the first time ever. CE-1 mode includes both chorus and vibrato, reproducing the two sound modes in the original pedal. While the CE-1 had a single Chorus Intensity knob that increased rate and depth at the same time, the CE-2W’s independent Rate and Depth knobs provide expanded chorus control not previously available.

BOSS’s storied history is connected with the chorus effect from the very beginning. Introduced in 1976, the CE-1 was not only the first chorus effect in pedal form, but also the very first BOSS effects pedal ever produced. In 1979, the CE-2 brought this unique effect to the now-famous compact pedal lineup, which was quickly gaining worldwide popularity after being launched two years before.

The CE-1 and CE-2 represent the early days of BOSS’s continuing dedication to innovation and quality. They brought together the cutting-edge tech of the time with a passion for helping musicians make great music, setting a benchmark that’s been at the heart of every BOSS product since. To commemorate this historic 40th anniversary, the Waza Craft CE-2W Chorus is produced in Japan just like the original pedals, honoring the rich heritage of BOSS effects innovation.